– “…It’s feasible that the MJ-12 Directives drafted by Dulles and approved by the MJ-12 Committee were used not only for the 1963 assassination of President Kennedy, but also for the removal of his son, 36 years later”

On April 8, QAnon posted two messages linking the Clintons and the CIA to the plane crash of John F. Kennedy Jr and how his death cleared the path for Hillary Clinton to start her political career by running unopposed by any major Democratic rival for the newly available US Senate seat for New York.

If the Clintons were involved in the death of JFK Jr it would be ironic since Bill Clinton sought to find out who killed President Kennedy just before his inauguration in January 1993, presumably to avoid a similar fate. The answers he received later helped Hillary Clinton launch her political career.

Furthermore, QAnon’s posts reveal the thinking of military intelligence officials about leading political figures such as the Clintons and agencies such as the CIA. We are now ready to closely examine what QAnon had to say about JFK Jr:

The first two lines of the post reveal that Donald Trump had a relationship with JFK Jr. This is not that surprising since there are photos showing Trump and Kennedy together at his exclusive Mar-a-Lago club on Feb 29, 1996.

The fact that they were probably friends is significant in that Trump would likely be highly motivated to have the truth come out about what really happened.

The next line in the post refers to the Kennedy’s plane crash on July 16, 1999, which killed him, his wife and sister-in-law. The crash happened soon after JFK Jr had told two friends that he was planning to run for the U.S. Senate seat that had become available after the retirement of Daniel Patrick Moynihan.

Only months before the crash, Hillary Clinton had declared her candidacy for the Senate seat, but was running into criticism for being a carpetbagger since she and Bill Clinton were not New York residents.

According to a New York Daily News story published on July 20, 1999, JFK, Jr., was secretly planning to run for the Senate seat despite Hillary having already declared her candidacy. Given a 1997 private poll showing that “John F. Kennedy Jr. was by far the state’s most popular Democrat.”, it’s highly likely that he would have succeeded.

Kennedy’s entry into the Senate seat race would have denied Hillary the start she was seeking to her political career just before Bill’s impending Presidential retirement.

QAnon was clearly linking the plane crash to the start of Hillary’s political career. While some may consider this to be mere coincidence, QAnon’s next post suggested something sinister had in fact happened. 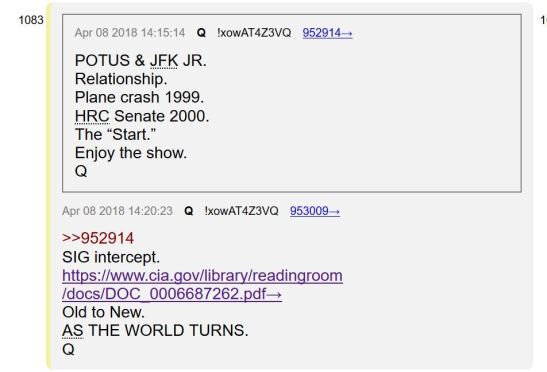 The link was to a January 1956 document in the CIA’s reading room that discussed an Earth Satellite Program that was linked to Guided Missiles and CIA operations. CIA Director Allen Dulles was mentioned as a part of the program. 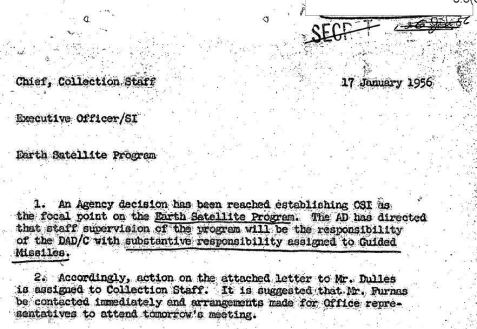 QAnon was implying that that JFK Jr’s plane crash was linked in some way to this or a similar advanced aerospace program, the CIA and Dulles. The Dulles connection is highly significant since there is much documentation linking him directly to the 1963 assassination of President John F. Kennedy.

More specifically, there is a Memorandum containing a set of eight policy directives drafted by Dulles on behalf of a mysterious committee called Majestic 12 (MJ-12) in charge of advanced aerospace programs. One of the eight directives, Project Environment, gave cryptic authorization for the assassination of any public official that threatened Majestic 12 operations.

The text of the above Directive reads:

Draft – Directive Regarding Project Environment – When conditions become non-conducive for growth in our environment and Washington cannot be influenced any further, the weather is lacking any precipitation … it should be wet.

Dr Robert Wood, who is the foremost expert in analyzing MJ-12 documents using forensic methods, has concluded that the partially burned document is an assassination directive. In an interview discussing the burned document, he pointed out that the cryptic phrase “it should be wet” originates from Russia, where the phrase ‘wet works’ or “wet affairs” denotes someone who had been killed and is drenched with blood…