– “…Oil was mainly used to fuel the kerosene lamp, a business destroyed by the emergence of gas and electrical illumination. The powerful oil interests of the day, led by the Rockefeller family, were bailed out of this crisis and set up for life with the advent of the automobile….The private automobile has risen to dominance in large part because of its ability to draw together a wide array of powerful corporate interests from steel makers to real estate developers, rubber companies to big box retailers”

Is it simply business as usual or a corporate conspiracy to destroy the planet? However one characterizes it our planet is being cooked so already wealthy people can make even more profit.

Last Friday the New York Times published a front-page story titled “The Oil Industry’s Covert Campaign to Rewrite American Car Emissions Rules.” The article pointed out that Exxon Mobil, Chevron, Marathon Oil, Koch Industries and other oil/refining interests won “rollbacks” to vehicle fuel mileage rules that “have gone further than the more modest changes automakers originally lobbied for.” The legislative changes are expected to “increase greenhouse gas emissions in the United States by more than the amount many midsize countries put out in a year.”

With internal combustion engines consuming nearly two-thirds of US petroleum, industry profits are threatened by measures that cut gasoline consumption (be it better fuel mileage, diverting funds from roadway, eliminating auto infrastructure, etc.). About 150,000 gas stations do hundreds of billions of dollars in sales every year. In The End of Oil: On the Edge of a Perilous New World Paul Roberts explains that the oil industry’s business model is planned around the gasoline pump, “from the kind of crude oil it sought to the kind of refineries it built, to its intense focus on retail marketing.”

The oil industry’s recent opposition to regulating automakers is consistent with its history of promoting automobility, as I and Bianca Mugyenyi detail in Stop Signs: Cars and Capitalism on the Road to Economic, Social and Ecological Decay. As far back as 1925, oil representatives packed a committee organized by the US surgeon-general concerning the health effects of leaded gas. They successfully argued that lead was harmless despite the fact that companies such as Standard Oil of New Jersey knew leaded gasoline was a health threat. Over the next 60 years lead levels increased a hundred-fold until it was finally banned in 1986.
In the 1930s and 40s Standard Oil of California and Phillips Petroleum were part of the corporate conspiracy against trolleys that changed the face of urban landscapes across North America. With General Motors and other companies they set up a network of front organizations that ripped up, converted and resold a hundred electric transit systems in 45 cities.

Amidst increasing smog in California in the 1950s, oil interests engaged in a fight against anti-pollution legislation. They financed the Stanford Research Institute to contest the findings of Professor Arie J. Haagen-Smit who demonstrated that automobiles and oil refineries were the major sources of smog. 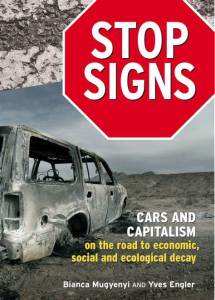 In 1970 oil companies helped defeat California’s Proposition 18, an initiative to divert a small portion of the state gas tax to public transit.

Oil companies were part of the National Highway Users Conference (NHUC) that was set up during the Depression to lobby for roadway funding. When the Chicago Transit Authority proposed using $30 million in state fuel tax to finance improvements to mass transit in the mid-1950s, the NHUC sent in two full-time workers to successfully coordinate opposition (with the Illinois Highway Users Conference) against the proposal.

Oil interests were part of another group that lobbied for the Interstate. Beginning in 1942 the “Road Gang”, a secret society of men representing, automobile, truck and tire makers as well highway engineers, top highway bureaucrats, etc. met regularly in a private Washington, DC, restaurant to push for more roadway.

The private automobile has risen to dominance in large part because of its ability to draw together a wide array of powerful corporate interests from steel makers to real estate developers, rubber companies to big box retailers. During the automobile’s embryonic phase, the oil industry was already big business. At that time, oil was mainly used to fuel the kerosene lamp, a business destroyed by the emergence of gas and electrical illumination. The powerful oil interests of the day, led by the Rockefeller family, were bailed out of this crisis and set up for life with the advent of the automobile. And as barrel upon barrel was drained from the earth and pumped into gas tanks, big oil swam in its profits.

So, in many respects, oil interests lobbying against restrictions on automakers is simply business as usual, given their history of promoting automobility. But, given the dangers of climate disturbances ‘business as usual’ takes on the appearance of a criminal corporate conspiracy to destroy civilization.