– “…Appointing the former CEO of Exxon as Secretary of State was about as appropriate as putting Bernie Madoff in charge of the treasury. Tillerson is too close to Russia, and he’s too close to the oil business. He was with Exxon for 41 years. Since 2011, his company has been entering into multibillion-dollar deals with the Russian firm Rosneft, allowing Exxon access to the Russian Arctic, Siberia, and Russia’s far east”:

Rex Tillerson likes his privacy. Career diplomats working in the same building with him were given special instructions: Do not try to make eye contact with him, and do not speak to him directly.

On his first three trips abroad, Tillerson did not even meet with State Department employees in their embassies. Nor did he allow the usual press corps to accompany him on those trips. He took along only one reporter, one who was from the conservative website, Independent Journal Review. He does not like to answer questions.

To many, appointing the former CEO of Exxon as Secretary of State was about as appropriate as putting Bernie Madoff in charge of the treasury.

Tillerson is too close to Russia, and he’s too close to the oil business. He was with Exxon for 41 years. Since 2011, his company has been entering into multibillion-dollar deals with the Russian firm Rosneft, allowing Exxon access to the Russian Arctic, Siberia, and Russia’s far east. The Russian arctic alone contains approximately 22% of the world’s undiscovered oil and gas.

This association presents a conflict of interest. Because the US imposed sanctions against Russia after it invaded Ukraine in 2014, Exxon is reported to have lost $1 billion. Tillerson is opposed to the sanctions.

And there is another potential conflict of interest. Terry Collingsworth, a lawyer with International Rights Advocates, is concerned that a State Department under Tillerson may “intervene to side with big companies like Exxon Mobil in future human rights abuse cases.”

Collingsworth is the lawyer for plaintiffs involved in a lawsuit against Exxon Mobil for “damages” inflicted by Indonesian military hired to perform “security services” on behalf of Exxon. The “security services” involved “human rights abuses, including genocide, murder, torture, crimes against humanity, sexual violence, and kidnaping.” (According to a progressive website, this is just one of many lawsuits.) Collingsworth believes the appointment of Tillerson sends a message:

“The world is open for business — environment and human rights be damned.”

Dick Russell has just published a book on the very people who embrace that attitude — including Rex Tillerson — and the devastating consequences it has had on our planet: Horsemen of the Apocalypse: The Men Who are Destroying Life on Earth and What It Means for Our Children (with an Introduction by Robert F. Kennedy, Jr.) (Hot books, April 2017) He says of them:

“These dark lords like to pose as good family men, benefactors of charities and the arts, upstanding pillars of their community. But first and foremost they are enemies of life on earth. This book has sought to put a face to the entrenched evil that has pushed us to the point of no return.”

Below is the first of two parts excerpted from Chapter One of this book.  To see the second part, go here.

Dick Russell has many passions, as demonstrated by his many books, but he is perhaps best known for his thrilling, The Man Who Knew Too Much (Carroll & Graf, 2003). His other books include My Mysterious Son: A Life-Changing Passage Between Schizophrenia and Shamanism  (Skyhorse Publishing, 2014); The Life and Ideas of James Hillman:Volume I: The Making of a Psychologist (Arcade Publishing, 2013); On the Trail of the Assassins: A Groundbreaking Look at America’s Most Infamous Conspiracy (Skyhorse Publishing, 2010); Striper Wars: An American Fish Story (Island Press, 2005); Black Genius and the American Experience (Carroll & Graf 1998).

Rex Wayne Tillerson, a product of small towns in Texas and Oklahoma whose father worked four decades as a professional organizer for the Boy Scouts of America, is himself an Eagle Scout. Indeed, Tillerson  the former ExxonMobil CEO still denotes this on his resumé. His corporate speeches often cite the Scout Oath and Scout Law. But when it comes to his business practices, Tillerson is not a good Scout. Doesn’t a Boy Scout leave a place cleaner than they found it?

Tillerson has shown he can be a good steward of the earth, however, if he happens to own the plot of earth. He leaped into action in 2014, when a 15-story water tower was slated to be built adjacent to his ranch. The tower’s purpose? Providing water to a nearby natural gas drilling site that utilized hydraulic fracturing, commonly known as “fracking.”

ExxonMobil had lately become America’s largest homegrown producer of natural gas, and Tillerson had publicly said of attempts to curtail fracking, “This type of dysfunctional regulation is holding back the American economic recovery, growth and global competitiveness.”

However, in his backyard, fracking would apparently create “a constant and unbearable nuisance to those that live next to it,” including “traffic with heavy trucks” which would devalue his property. So Tillerson joined a lawsuit aimed at shutting down the project, along with co-plaintiff Dick Armey, the former Republican House Majority Leader. (Adding to the richness of the irony, Armey is currently chair of FreedomWorks, a Tea Party group that loudly supports fracking. But Armey’s $2 million, 78-acre ranch also lies adjacent to the water tower site, which puts things in a different perspective.)

But when it comes to the health of the planet, Tillerson has little concern for future generations. In August 2015, 21 young people from around the U.S. filed a still-ongoing lawsuit against the Obama administration, alleging that the federal government has violated their rights by failing to protect present and future generations from human-caused climate change.

Ranging in age from 8 to 19, the youth addressed conditions near their own homes: extreme drought, a threatened forest leading to water scarcity, an unswimmable river due to fish die-offs.

ExxonMobil, Koch Industries, and dozens more oil and gas companies were worried enough about the children’s crusade to join the government’s effort to defeat the lawsuit. The fossil fuel powerhouses called the youth’s case “extraordinary” and “a direct threat to [their] businesses.”

In response to the energy industry aggressive counterattack, retired NASA scientist James Hansen, who has been sounding the alarm about climate change for decades, declared, “I am not surprised that fossil fuel corporations seek to derail this case, but the fundamental rights of my granddaughter and future generations to life, liberty, and pursuit of happiness must prevail.” 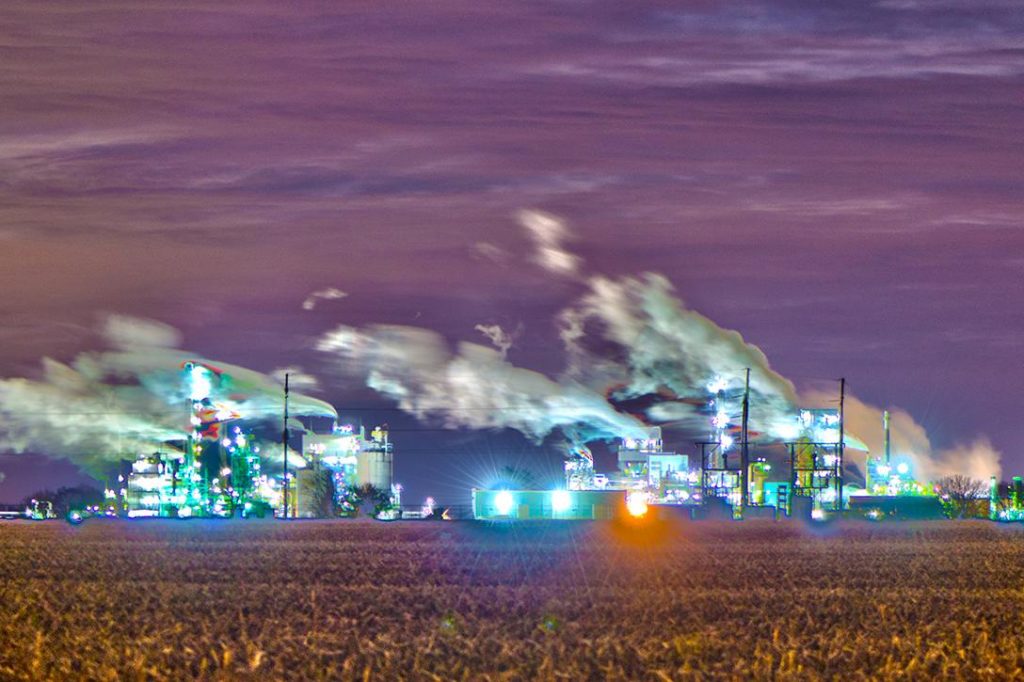 Rex Tillerson joined Exxon in 1975, upon graduating from the University of Texas. He would rise quickly through the ranks of the multinational energy giant’s oil-and-gas discovery division. Kenneth Cohen entered the corporation as legal counsel in 1977, ultimately going on to run its public affairs department. Cohen would also serve as a national trustee of the Boys and Girls Clubs of America.

Tillerson and Cohen, so-called youth advocates, would become primary players in denying to this day the catastrophic risks that climate change poses to the very survival of future generations.

Nor are they alone. Jack Gerard has been at the helm since 2008 of the American Petroleum Institute, the industry’s leading lobby. Gerard, who has been named one of Washington, D.C.’s “Power 100,” and his wife have eight children, including twin boys adopted from Guatemala. He is a past chairman of the National Capital Area Council of the Boy Scouts of America, which hosts thousands of youth in Washington, Maryland, Virginia and the Virgin Islands, and he continues to serve as a Boy Scouts board member.

In delivering a State of American Energy address in January 2016, Gerard spoke of how fossil fuels must “remain the foundation upon which our modern society rests for decades to come” despite “an ardent few who continue to believe that keeping our nation’s abundant energy resources in the ground is a credible and viable national energy strategy. There are some in government who will advance their favored forms of energy to that dubious and untested end, heedless of the potential harm it could cause to our economy.”

Against all scientific wisdom, Gerard also demanded the elimination of all government obstacles to future carbon energy exploitation, decrying the “dangerous combination of outdated policies and anti-fossil fuel political ideology that discourages American companies from investing in tomorrow’s pipelines, marine terminals and other energy infrastructure projects.”

Be prepared, Boy Scouts are taught. This has become a particularly urgent lesson as the human race is forced to prepare for one natural disaster after the next linked to our changing climate. 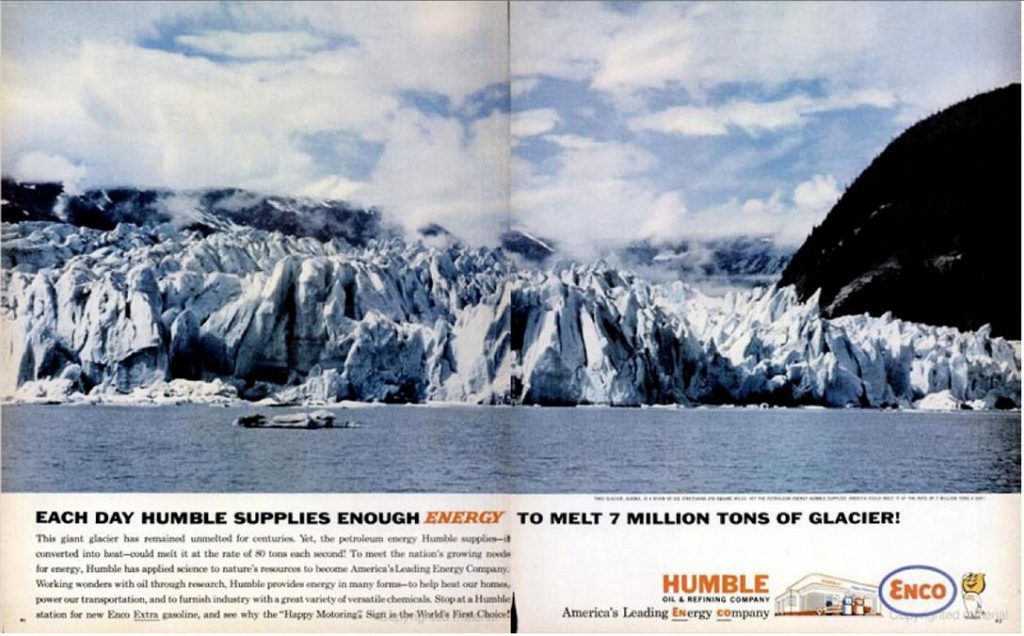 All the way back in 1958, Bell Laboratories funded a series of TV science specials produced by the legendary Frank Capra. One of the episodes, titled “The Unchained Goddess,” featured Dr. Frank B. Baxter, a professor at the University of Southern California. Over a half century ago, Baxter told a national audience,

“Even now, man may be unwittingly changing the world’s climate through the waste products of his civilization. Due to our release, through factories and automobiles every year, of more than six billion tons of carbon dioxide….our atmosphere seems to be getting warmer. It’s been calculated that a few degrees rise in the earth’s temperature would melt the polar ice caps, and if this happens, an inland sea would fill a good portion of the Mississippi Valley.  Tourists in glass-bottomed boats would be viewing the drowned towers of Miami through 150 feet of tropical water.”

Four years later, Humble Oil and Refining – to be “rebranded” in the early 1970s as Exxon – took out a two-page color ad in Life Magazine. Below a beautiful color photograph of Alaska’s cloud-bedecked Taku Glacier, its headline read:

TO MELT 7 MILLION TONS OF GLACIER!

This giant glacier has remained unmelted for centuries.  Yet, the petroleum energy Humble supplies – if converted into heat – could melt it at the rate of 80 tons each second!

Was it prescience? Or a kind of Freudian slip? We’ll never know.