– “…It could easily be overwhelming to face a group on the other side of an issue or candidate, but this study suggests that reminding yourself of wanting to be an individual can make it a better experience, challenging instead of threating, invigorating instead of overwhelming”:

Going with the flow might appear easier than sticking up for yourself when confronted with unanimous disagreement. But as uncomfortable as it may be to walk as the lone dissenter, it not only reinforces core values, it also creates a ripple effect where others take notice. 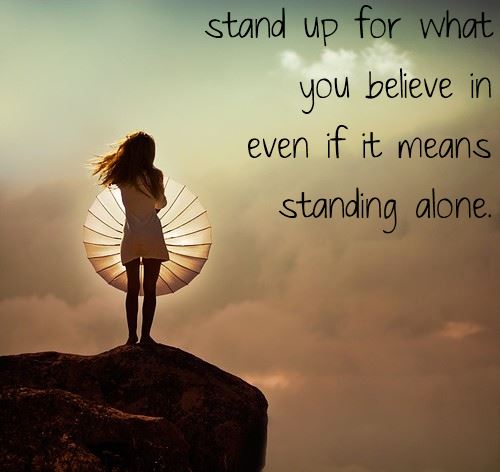 A new University at Buffalo study that assessed bodily responses suggests that standing up for your beliefs, expressing your opinions and demonstrating your core values can be a positive psychological experience.Our happiness, and ultimately our lives, are defined by the choices we make. When we allow other people to tell us how to feel, they are making those choices for us, and we are giving away our truth. Since all truths are true, we must define if it is our ego we are standing up for or something more.

There can be a clear divergence between what people do and say and how they feel, according to Mark Seery, an associate professor in the Department of Psychology.

“People can show conformity, but going along with the group doesn’t mean they’re going along happily,” he says. “The external behavior isn’t necessarily a good indication of their internal experience.”

When we passionately believe in something, we should let people know why we stand up for those ideals. We may not change the mindset for others, but we may change the conversation. It then leads into different directions of consciousness and people begin to recognize why we are so adamant and passionate about out opinions even if others disagree with them. The findings, published in the journal Psychophysiology, provide new insights into what it’s like being alone against the group, investigating the experience as it happens.

Methodologically this a hard thing to capture, according to Seery.

He says there is a long tradition in social psychology investigating how people are affected by pressure to conform to a group. The vast majority of the work has focused on behavior and self-reported attitudes, with the assumption that it’s uncomfortable being the lone dissenter and that people are motivated to conform because it relieves their discomfort.

Questioning study subjects during the experience can be disruptive, while waiting to interview them later demands that they recall feelings that aren’t always accurately reported.

“But we can tap into the experience using psychophysiological measures, which is what we did in this case by assessing cardiovascular responses,” says Seery. “That’s where this study started. To try to understand what that momentary experience of conformity pressure is like.”

Anger is often the emotional indicator of disrespect and injustice. Hiding anger, in turn, is the emotional sign that you will allow it to happen. Many confuse the defensive act of using that little bit of anger, with the expansive attacking posture of seeking egotistical gain at the expense of others. They mistake self-defense for malevolent intent.

So people will remain silent and pretend they’re not affected when they are made fun of, put down, or treated below their true value by others, including family, including “loved” ones. But in the name of compassion and love, in the name of keeping the energy high, it’s not about allowing perceived perpetrators to run rampant at your expense, but letting all others understand that you accept the perspective of others even if they disagree with you.

By measuring cardiovascular responses, Seery and the other researchers — UB colleague Shira Gabriel, Daemen College’s Shannon Lupien and Southern Illinois University’s Mitsuru Shimizu — get a sense for how people are evaluating personal resources versus the demands of the situation while in the act of potentially conforming.

When trying to reach a goal, evaluating high resources and low demands leads to a mostly positive, invigorating experience called challenge, which corresponds with feeling confident. Low resources and high demands lead to a much less confident state called threat, which may produce feelings of anxiety.

The researchers assigned participants into one of four experimental conditions, each with a goal to either fit in with a group’s political opinion or assert their individuality, and with a group that either agreed or disagreed with participants’ opinion on the issue.

“You may have to work to reach a goal, but when you experience challenge, it is more like feeling invigorated than overwhelmed. It is consistent with seeing something to gain rather than focusing on what can be lost,” he says.

The results have interesting implications, especially in an election year when someone can be surrounded by family members, co-workers or even neighborhood lawn signs that run contrary to personal opinions.

There’s often zero to gain from confrontation, especially that which is antagonistic. Don’t look for winning, but kindness. Don’t look for conquering, but compassion. Sometimes situations are not linear, crystal clear, black and white. It is your discernment to know when it’s time to stand up and apply your reasoning or when it’s just best to let go. However, both can be done through heart-felt intention and understanding the perspective of others and that alone reduces your own emotional entanglement throughout each experience.

“It could easily be overwhelming to face a group on the other side of an issue or candidate, but this study suggests that reminding yourself of wanting to be an individual can make it a better experience, challenging instead of threating, invigorating instead of overwhelming,” Seery says.

One thought on “REBEL YELL: Standing Up For Your Beliefs In Unanimous Disagreement Is What Changes Your World – By Josh Richardson”