– George Bush the elder is not the first father to blame his son’s mistakes on the bad crowd he fell in with, and the counter to such paternal indulgence is always the same: the son has an important say on the friends he chooses, especially when he happens to be the US president.

The personal quotes in the new biography of George HW Bush, Destiny and Power: the American Odyssey of George Herbert Walker Bush by Jon Meacham, show he has neither given up his long struggle with English syntax, nor abandoned his protective feelings towards his son and successor in the White House.

It is another public window into a family wrestling with the most toxic legacies of the junior Bush’s presidency, the Iraq invasion and torture, and it comes after a series of episodes on the Republican primary trail in which Jeb Bush has tried to dodge a definitive verdict on his elder brother’s exploits. Both father and brother have sought to create distance without appearing to throw a close family member under a bus. 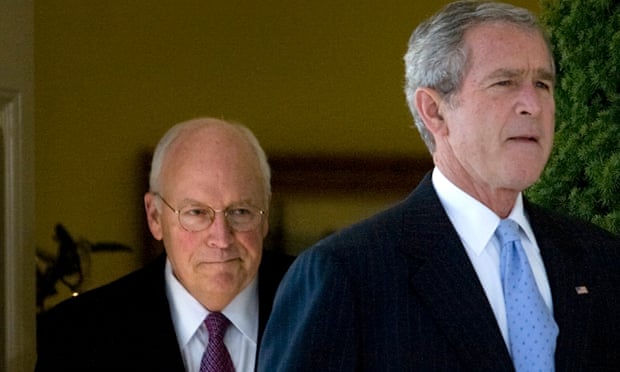 Dick Cheney and George W Bush at the White House on 14 December 2007. Cheney was part of a group of Bush Jr advisers who called themselves ‘the Vulcans’. Photograph: Brendan Smialowski/Getty Images

For Bush Sr, the dilemma is all the more agonising as some of the White House advisers he now criticises are former employees he bequeathed to his son. Dick Cheney had been his defence secretary, and Condoleezza Rice was a Russian specialist in the first Bush White House and protege of Brent Scowcroft, the elder Bush’s national security adviser and friend.

The two were part of a group of foreign and security policy advisers that Bush Jr gathered around him during the 2000 election campaign. They called themselves “the Vulcans”, not as a tribute to Spock, but to demonstrate they were as tough (or as Bush Sr might say, “iron-ass”) as the Roman god of fire. The Vulcans who huddled at Bush’s Texas ranch at Crawford also included the former and future defence secretary Donald Rumsfeld, and the man who would become his deputy at the Pentagon, leading neoconservative ideologue Paul Wolfowitz, as well as former top general Colin Powell, together with his close confidant, Richard Armitage.

The latter two would emerge as the doves in the Bush administration, but at the time, Cheney, Rumsfeld and Rice were also seen as embodiments of continuity, steady hands at the side of a presidential candidate vulnerable to allegations of inexperience. However, beneath the surface lay plans for radical change from the very beginning.

Even before 9/11, the younger Bush led his administration in a quite different direction from his father. While Bush Sr and Scowcroft cherished multilateralism and diplomacy, George W’s White House raised American exceptionalism to new heights, enthusiastically tossing US entanglements with the international community on the bonfire. The administration walked away from the Kyoto talks on climate change, and withdrew US support for the Rome statute establishing the international criminal court, going so far as to declare that it would “unsign” the treaty. 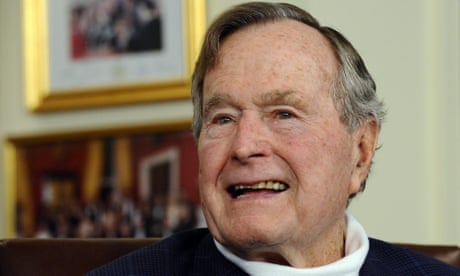 This unilateralist inclination was clearly the younger Bush’s choice. It was how he intended from the outset to make his foreign policy distinctive from his father’s. And it was this characteristic that made for such a dangerously volatile and over-reaching US response when the 9/11 attacks came.

There is no doubt that Cheney and Rumsfeld were given more licence and authority than almost all their predecessors once the “war on terror” began. Cheney was certainly the most powerful vice-president of modern times, with a large and assertive staff, something that Bush Sr draws particular attention to.

Cheney and Rumsfeld used their enhanced power to poison the flow of information to the president’s desk about Iraq and its supposed weapons of mass destruction. The vice-president even made repeated trips to CIA headquarters in Langley to bully analysts into producing more hawkish reports, while Rumsfeld’s Pentagon sucked up highly dubious “evidence” from Iraqi exiles and ideological freelancers. But, as even as the ever-forgiving father admits in Meacham’s book, it was President Bush who allowed Cheney to grow his own empire.

“I think they overdid that. But it’s not Cheney’s fault. It’s the president’s fault,” Bush Sr says.

“The buck stops there,” he adds, in a riposte to his own efforts to spread the blame for the fiascos of his son’s presidency.

Perhaps the most alarming revelation to emerge from the new Bush biography is the elder man’s recollection that while Cheney had been his defence secretary, he had commissioned a study on how many tactical nuclear weapons would be needed to eliminate a division of Saddam Hussein’s Republican Guard.

Apparently the answer was 17, though a more profound conclusion is that Cheney was a more dangerous figure than anyone knew. It adds weight to reporting by Seymour Hersh in the New Yorker that Cheney also contemplated the use of low-yield nuclear bunker-busters against Iran’s underground uranium enrichment facilities. The more we hear about the George W Bush administration, the clearer it becomes that the global damage it wrought could have been even worse.