How the American Diet Turbocharges COVID-19

The pandemic’s toll is further proof that we’re eating ourselves sick. 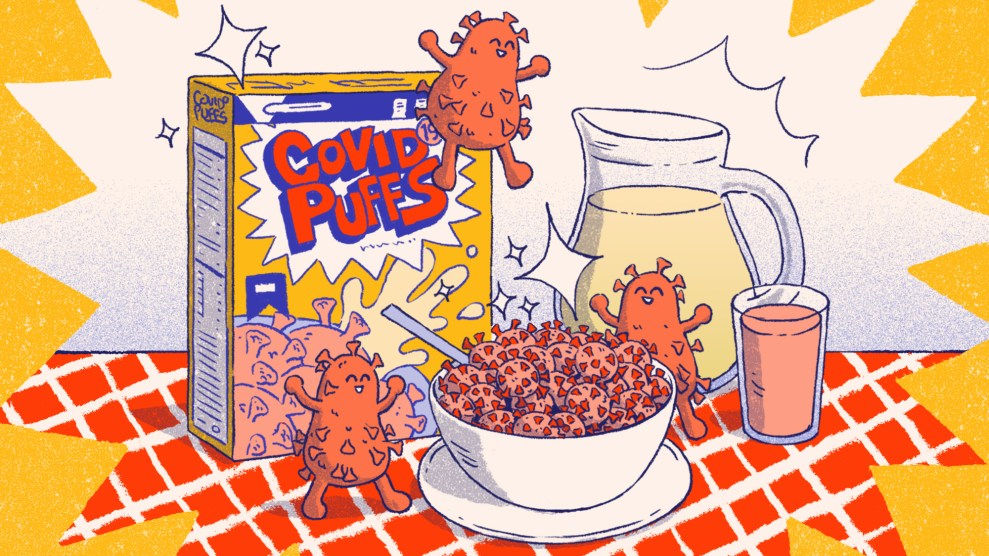 Before the coronavirus hit in early 2020, a quieter epidemic was already taking its toll across the United States: the near-universal prevalence of diet-­related maladies. More than half of the calories Americans consume come from “ultraprocessed” foods that are shot through with added sugars and fats and are associated with weight gain. Pile those on top of our sedentary lifestyle, and the result is that almost 90 percent of adults have a sign of metabolic dysfunction—including high blood pressure, cholesterol, or blood sugar—and more than 40 percent are obese. In the pandemic’s first five months, the US had a 39 percent higher mortality rate than Europe, where the obesity rate is half ours.

This mess made us vulnerable to the worst aspects of the coronavirus: In the first five months of the pandemic, the United States had a 39 percent higher mortality rate than Europe, where the obesity rate is half ours.

According to a recent study led by University of North Carolina nutrition professor Barry Popkin, obese COVID-19 patients were more than twice as likely to require hospitalization than non-obese patients, about 1.75 times more likely to require a stay in an intensive-care unit, and 1.5 times more likely to die. But why? “Fat cells are active,” Popkin explains—they generate low-grade chronic inflammation that compromises the immune system. Obesity often brings with it breathing troubles like reduced lung capacity and sleep apnea, as well as a propensity for blood clotting.

“We’ve known that processed food is dangerous, but we’ve always assumed it was for chronic diseases,” says Dr. Robert Lustig, professor emeritus of pediatrics at the University of California, San Francisco. “What we didn’t know, until this pandemic, is that chronic disease also sets you up for morbidity and mortality from acute diseases” like COVID-19.

Lustig is also the chief science officer of Eat Real, a nonprofit that promotes healthy food choices and has called for federal restrictions on the marketing of junk food to kids as well as universally free school lunches made from whole foods.

Such structural interventions are urgent because the underlying problem isn’t just about individual choice, says Daphene Altema-­Johnson, program officer for food communities and public health at Johns Hopkins University’s Center for a Livable Future. While Americans of all economic classes eat meals loaded with added sugars and fats, dietary quality correlates inversely with income. For the millions of Americans in underpaid front-line jobs with the highest risk of coronavirus exposure, ultraprocessed food is cheap and convenient.

“Do we know how difficult it is to change behaviors?” Altema-­Johnson says. “Is that really what you want to do right now, when you’re trying to figure out where the next meal is coming from—or if your lights are going to stay on?” “Double up food bucks” have twice the spending power if they’re put toward fruits and vegetables.

Yet helping feed families and nudging them to be healthier don’t have to be competing goals. Rather than pushing to restrict access the Supplemental Nutrition Assistance Program (SNAP), as President Donald Trump did during his tenure, the government could ramp it up and expand access to “double up food bucks” that have twice the spending power if they’re put toward fruits and vegetables.

A 2017 study by Stanford researchers found that even an incentive of 30 cents on the dollar to buy fresh produce would result in a 10 percent drop in Type 2 diabetes among kids and adults who receive SNAP benefits.

“Double up” programs don’t just benefit their recipients, says Holly Parker, senior director of programs at the Michigan-based Fair Food Network, which pioneered the state’s incentive program a decade ago. By teaming up with local produce growers, the programs can also boost local economies. Twenty-eight states now sponsor such initiatives, with some help from the USDA.

As the economy teeters, anti-hunger advocates are hoping for full federal funding. The programs essentially pay for themselves, the Stanford study found, because lower health care costs outweigh the additional expenditures. Obesity alone generates around $315 billion in health care costs annually, a large portion of which is picked up by public programs like Medicaid. As Parker says, “It’s either a dollar to a farmer now, or a dollar to the doctor later.”

3 thoughts on “FOOD FRAUD: How the American Diet Turbocharges COVID-19”