– “…Mary Magdalene is a dangerous figure to Church “authorities” because she teaches individuals how to connect directly to the Divine without using priests and donations but rather by activating symbols and using spiritual techniques. She represents dangerous teachings such as the sacred marriage and sexuality as opposed to celibacy and virginity…a new view of her not as the penitent prostitute — nowhere in scripture does it ever say she was a prostitute– but as co-Teacher, even a Christian Goddess”

Order of Mary Magdala – (Magdala is Aramaic for “Magdalene”)

She is the Stuff of Legends & Heresies

Church “authorities” have long considered Mary Magdalene a dangerous woman. So dangerous, they purposely labelled her a prostitute and covered up her role in Yeshua’s life. Her true role in Christianity as co-Teacher with Jesus has been at best, obscured, and at worst — purposely obliterated.

What were/are they so afraid of?

Our Order works to honor and restore the Magdala, the Sacred Feminine, to her rightful place as part of the Godhead. We are following Yeshua and Magdala’s true tradition, long suppressed, violently removed from mainstream Christianity, but always surviving just below the surface, in the esoteric, heretical fringe……

(Also Read: THE WOMAN WHO KNEW THE ALL, Beloved Disciple, Gnostic Teacher, Sophia, and the True Companion of Jesus. @ http://www.thesecretmagdalene.com/mariamne.html)

The Order of Mary Magdala is open to both women and men. An esoteric Christian order, we study the true teachings, mystical techniques, meditations and prayers of Yeshua and Mary Magdalene. Yeshua’s band had several prominent female disciples, whose names are mentioned right in the Bible (Luke 8). The Gnostic scriptures mention seven female students by name (Pistis Sophia).

Yeshua taught balance between the sexes and (scandalously!) accepted females into his school. He and Mary Magdalene embodied and manifested the archetypes of divine masculine and divine feminine united in the sacred marriage. The sacred marriage is a process that occurs in the subconscious mind as well as in the collective unconscious of humanity. Our Order of Mary Magdala teaches techniques that actualize these powerful archetypes, inner guides, divine “entities,” and show you how to bring them into your life. Getting to know your inner guides, practicing wholeness, and the alchemy of the sacred marriage will transform your awareness and lead to the highest form of ecstasy or “bliss”.

The sacred marriage is working in our lives whenever we balance pairs of opposites: heart and head, male and female, light and dark, heaven and earth, conscious and unconscious, ego and soul, spirit and matter. Symbols such as the Yin-Yang, Star of David and Sufism’s Lock & Key represent the sacred marriage. You can even find the sacred marriage archetype in the Tarot deck — the Lovers card.

You can’t keep archetypes down — they will re-manifest eventually

During the Dark Ages, the memory of Mary Magdalene’s prominent role in true Christianity was kept alive in various secret heresies and legends. In the Golden Legend and the Grail heresy Mary Magdalene was the Holy Grail that carried the blood of Jesus (in her womb in the form of their child). Then came the tarot deck and the traveling minstrels — the “ministers” of the underground alternative Church. The entire Tarot deck was a vehicle for heretical teaching in the days when the Roman Catholic Church was opposed to any individual personally seeking the Divine. If the Church couldn’t control it, they condemned it — even condemning valid and profound spiritual techniques such as Kabbalah, automatic writing, and using Tarot’s picture cards to access the archetypes, our inner guides.

Mary Magdalene’s name is listed first in the Gospels whenever women are mentioned. The Gnostic Gospel of Phillip calls her
koinonos, meaning the “spouse” or “partner” of Jesus in two places. This same Gospel, suppressed by the Church, also describes a scene where several of Jesus’ male students became jealous because “Jesus kissed her often on the mouth”. Magdalene was in all likelihood Yeshua’s wife, and we believe co-Savior with him.

She was a manifestation of the sacred feminine, perhaps the daughter of Sophia and God-the-Father. Sophia, goddess of wisdom, called God’s Spouse, lives in the pages of the Old and New Testaments as well as the Apocrypha, especially in such books as Song of Solomon (also called Song of Songs or Canticles). Other names of God-the-Father’s spouse are Asherah and Shekinah. Sophia is just another name for our Heavenly Mother even as God-the-Father is called Yahweh, and El, Adonai, Elohim, and El Shaddai. (El is the oldest name for him, the root of god-names like Allah and Michael).

God-the-Father and God-the-Mother both chose to incarnate the active principal of themselves upon the earth together in order to draw their created selves (all of us) back to Them. We are their kin, they are our Divine Creators. Pictured left is an intriguing work by artist Barbara Getrost. She has “married” many universal symbols in this work entitled, “Marriage of Heaven and Earth.” We can see two Vesica Piscis (fish) shapes in the middle created by the overlapping circles. The arms of the divine figures seem to be moving upward in a gesture of creation, a purple star bursting where their wrists cross or hands join. The pyramids are nifty, too, as is the squaring of the circle, that ancient symbol of the hieros gamos (sacred marriage). The figures are either Mother and Father God or Magdalene and Jesus.

Mary Magdalene is a dangerous figure to Church “authorities” because she teaches individuals how to connect directly to the Divine without using priests and donations but rather by activating symbols and using spiritual techniques. She represents dangerous teachings such as the sacred marriage and sexuality as opposed to celibacy and virginity. Her existence at the heart of Christianity proves sexuality is healthy rather than dysfunctional and “dirty.” That is something the Church has tried to keep us from figuring out for centuries. 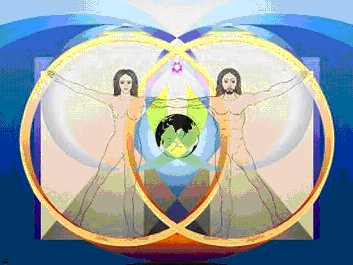 Even today people freak out over books like the DaVinci Code and think we’re honoring a dangerous pagan goddess. She, they warn, is of the devil. Why are they threatened by alternative forms of Christianity such as Grail and Esoteric Christianity? Because the teachings Mary Magdalene presides over take power from the hands of the few, from the old-boy network, from the Church authorities and give it to every person, to you and me.

Power-hungry, sexually dysfunctional control-freaks do not share power. They want it all, and for many centuries they kept it all. Power and money was in the hands of a very few, all in the name of God.

As the year 2001 brought the third millennium there came a new awakening to the message of the Magdala, a new view of her not as the penitent prostitute — nowhere in scripture does it ever say she was a prostitute– but as co-Teacher, even a Christian Goddess. To avoid execution by the Church for heresy, the early adherents of the alternative underground Church (sometimes called the “Grail Heresy”) developed codes and secret symbols. Mary Magdalene was indicated in the occult (hidden), “heretical” and Gnostic world by her initials MM.

Mary, Mother of Yeshua, was indicated by one M. Margaret Starbird has pointed out in her books that the Roman numerals for 2000 are MM. Mary called Magdalene is therefore the Lady of the new Millennium. The Restoration of this Goddess in the Gospels to her rightful place in Judeo-Christianity may be the next step in the evolving faith called Christianity.

She was called Mary the Magdala, or in Greek, Magdalene. Magdala, is an Aramaic word meaning Tower of Strength. The original word in Hebrew is Migdal. In the Old Testament (Micah 4:8) the phrase Migdal-Eder, meaning Tower of the Flock, describes the Daughter of Tsion to whom “the Kingdom shall be returned”. According to some Jewish scholars, Migdal-Eder refers to Rachel, the beloved wife of Israel. Rachel is mother to the “Children of Israel”, and is symbolically the Queen Mother of Judaism. Migdal-Eder was a title also given to Mary Magdalene and she is the First Lady of Christianity.

Mary’s first name is Miriam in Hebrew, Maria in Greek.

More about her name from Margaret Starbird.

“I find this interesting: in the Gnostic Gospel of Mary [Magdalene] when Mary Magdalene had information revealed to her by Jesus, Peter and Andrew wouldn’t believe that she, as a woman, could receive this kind of information which “should” only be given to them (verse 10-19). And the ten pages explaining [most of] the secret [teachings] she received >were conveniently missing.”

It seems obvious that these pages were literally ripped from the “Gospel of Mary,” a gospel written around 150A.D. containing the true teachings of Yeshua and Mary Magdalene. Our Order of Mary Magdala studies this manuscript using the exciting powerfully resonate translation below.

The Gospel of Mary Magdalene 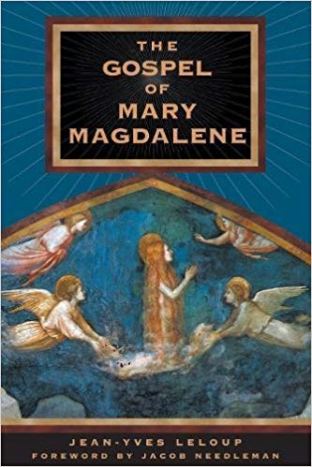 (written in 150 A.D.) translated and with commentary by Jean Yves-Leloup. If you want to know the earliest non-sexist self-realization teachings of Yeshua and MM, teachings suppressed for centuries by the controlling, power-hungry sexually-dysfunctional church, you simply must read this book

Mary the Magdalene, “Apostle to the Apostles” 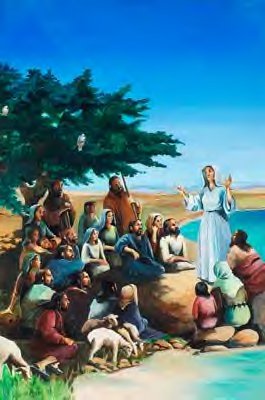 This painting shows Magdalene in a leadership, teaching role. She is the first one to break the news of the resurrection to Jesus’ disciples, earning herself the title, “Apostle to the Apostles” given her by the early church. In John’s gospel the risen Christ specifically commissions Magdalene, “Go instead to my brothers and sisters and tell them I am ascending to my Father and your Father, to my God and your God.”

“Mary Magdalene went to the disciples with the news ‘I have seen the Lord!’ and she told them that He had said these things to her.” (John 20:17-18).

In this painting we see her carrying out her mission, preaching with the authority conferred on her by the risen Yeshua Christ, preparing the disciples, both female and male, for the work of the future.