– “…The reality is that both the mandatory vaccine and 5G agendas imply that affected populations have already consented to a calculus of risks and benefits that requires the sacrifice of some aspect of one’s health…Health freedom is not a given. In places where it is codified in law or in the constitutions of states or nations, it was hard won, often requiring profound courage and even bloodshed. Once undone it becomes exceedingly difficult, if not at times impossible, to reinstated. Please don’t let it happen. Stand up for your rights, take action”

Our country, and world, face unprecedented challenges when it comes to health freedom; one in the form of mandatory vaccination and another in the form of universal wireless radiation exposure, involving increasingly complex and synergistically toxic electromagnetic frequencies. 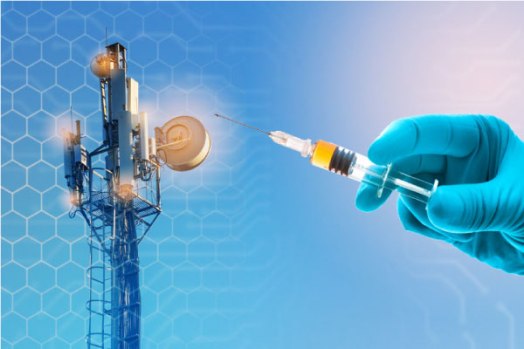 Both agendas are being implemented through the increasingly chimeric partnership of multinational corporations and would-be governmental regulators, both without the full and informed consent of affected populations, and both under the auspices that they are necessary for the greater good.

Both also come with promises that we can not rightfully ignore. First, universal vaccination promises a world without infectious disease, and with theoretical reductions in morbidity and mortality that could ‘save millions of lives.’ This would require vaccination against a near limitless number of ‘germs,’ with a pharmaceutical pipeline of hundreds of vaccines ready to flood the liability-free market, but which largely ignores the discovery of the microbiome’s role in the human holobiont which is comprised mostly of said germs – but that’s another topic you can explore here in greater depth here.

5G, on the other hand, promises a technological revolution where exponentially expanding wireless transmission speeds would connect billions of devices into an internet-of-things, that would span the world over. This is presented as a huge consumer win (e.g. faster streaming) but ignores other uses for this network which include surveillance and even potential weaponization. The fact that there are zero independent safety studies showing the 5G network’s intended use of milimeter wave frequencies is overlooked, much like the fact that the CDC immunization schedule contains not a single vaccine that has been tested for safety and efficacy in a double-blind, randomized, trial using a true saline placebo; much less the entire schedule, which contains literally thousands of antigens, in a toxicological cocktail of complexity it would technically near impossible to assess accurately for safety, both for acute and especially chronic adverse outcomes, such as autoimmunity disease, which in the case of the adverse effects of vaccine is far more common than most suspect.

This lack of safety testing, for both vaccines and 5G, is the primary red flag they share in common. The medical ethical principle of informed consent, arrived at only after the horrors of Nazi human experimentation came into full light during the Nuremberg trials, requires that those who undergo exposure to health risks be fully informed of them, and not just the purported benefits. Without access to information of this kind, without which informed consent is not possible, medical and/or the tech industry’s practice and products violate fundamental human rights.

Another commonality is how both technologies require the physical penetration of the body. It’s obvious with vaccination, but less so with “invisible” radiation. Visible or not, the 5G network requires setting up small cell transmission devices every few hundred feet in neighborhoods, essentially bathing communities in unprecedented levels of penetrative radiation, 24-7 — again, without consent.

If there is a single, universal, principle that anyone can relate to as a human on this planet it is that no one has, or should think they have, the right to penetrate your body without consent. This is a clearly established and commonly accepted principle when it comes to sexual transgressions, and physical violence. But there appears to be a glaring carve-out when it comes to mandating vaccination, as well as wireless radiation exposure. If it were not the case that all vaccinations presently approved for use by the FDA and CDC carry within their vaccine inserts warnings that they can cause disability and even death as a side effect, no matter how rare, and that there are thousands of studies establishing biological harm from non-ionizing, non-thermic effects from wireless radiation, people would not be so up in arms. Watch the recently released video on vaccines below to learn more:

The reality is that both the mandatory vaccine and 5G agendas imply that affected populations have already consented to a calculus of risks and benefits that requires the sacrifice of some aspect of one’s health, or some subset of the population, for the greater good. In the case of technologies, and/or vaccine mandates, that are being rolled out nationally and globally, without adequate transparency of information and debate, inaction is also a choice. This is why I encourage our readers to use the following platforms to raise awareness and take action:

The 5G Summit and the Environmental Health Trust

Health freedom is not a given. In places where it is codified in law or in the constitutions of states or nations, it was hard won, often requring profound courage and even bloodshed. Once undone it becomes exceedingly difficult, if not at times impossible, to reinstated. Please don’t let it happen. Stand up for your rights, take action, and please share our work with others.

Sayer Ji is founder of Greenmedinfo.com, a reviewer at the International Journal of Human Nutrition and Functional Medicine, Co-founder and CEO of Systome Biomed, Vice Chairman of the Board of the National Health Federation, Steering Committee Member of the Global Non-GMO Foundation